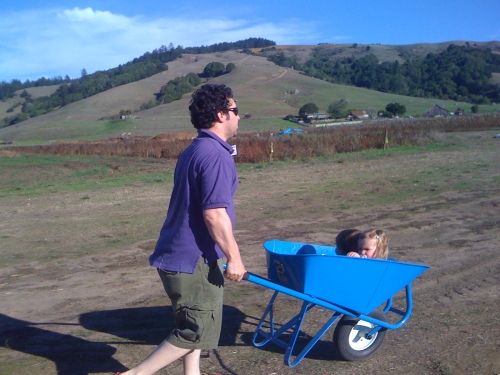 We’re wrapping up the “Little House” series. The good news is my daughter is now fascinated with all things Prairie — she says she wants to go back in time and live as a pioneer. I much prefer Wilder’s narrative, where one strives for self-sufficiency, than the passive princess storyline she previously used in her imaginative tales. Which apparently she picked up via osmosis from friends, since we don’t allow “waiting for my prince” books in the house? It’s such a battle to try to combat the Cinderella complex…Peggy Orenstein was right. Sigh.

It’s been informative to go back and read the “Little House” stories as an adult. For example, I didn’t remember how important it was to Ma for her daughters to wear the latest fashions. They were on the Prairie! Who cares? Yet back then, families clung to clothes and books and furnishings as a way to feel “civilized” in an unsettled and wild place. Laura is a strangely modern and relatable girl/woman much of the time too: most notably, she pursues a career to help pay for her sister’s college.

(Aside: can we talk about “Blind Mary,” as I began referring to her in my head, because seriously? To Laura, there’s not much more to Mary other than her visual impairment. Example: “Her beautiful unseeing eyes looked at nothing.” If I were Mary and I read the books, I would be pissed.)

Laura teaches school by herself in strange towns, she wants to get in snowball fights even though it wasn’t “ladylike” and she achieves the best grades in her class. (One notable exception to her modernity: she claims she’s not like Almanzo’s sister, who wants the right to vote.) Overall, I found I liked her just as much as an adult as I did when I was a kid.

So here are my Top 10 Lessons I Learned from Laura Ingalls Wilder, because I like lists.

1. All the latest fashions come from Iowa.
2. Always, ALWAYS look in the Northwest for a cloud. You never know when a blizzard might spring up and freeze you to death before you can climb into a haystack. (Getting into a haystack may help you survive a blizzard, BTW.)
3. Don’t play a snowball game with your students if you expect them to respect you as a teacher.
4. Almanzo was HOT. He and Mr. Darcy remain at the top of my literary crushes list.
5. Laura may have liked Almanzo’s horses and sweet buggy more than she liked him. In the beginning, at least. I guess a beautiful team of horses and a pretty buggy were the equivalent of a cool car back then?
6. The best food in the world is oyster soup, especially if you enjoy said soup with some tasty oyster crackers.
7. Pa learned the same hard lesson we all do at some point: your crops (or home or bonus or promotion) is not the same thing as money in the bank until you actually SELL said crops, get the money and put it in the bank.
8. Grasshoppers are EVIL!
9. The most important essentials for surviving a long winter? Wheat, hay and a coffee grinder. And a positive attitude.
10. “All’s Well That Ends Well!” Ma was always saying this after they nearly drowned in their covered wagon crossing a river, or Pa almost got eaten by a panther or an ox fell through their roof. And, it’s good advice for us all, really.

My son wants me to read the Harry Potter series next. The twins are five: is this appropriate? Is the first one OK? If you read me regularly, you probably know I am a HUGE fan of those books, but I am still scarred by the Happy Potter and the Deathly Hallows. It gave me the sads. ADVICE WELCOME!!

The Joy of Reading, Part 2

I finished Little House on the Prairie today, and I had LOTS of questions.

So I went online and fell down several rabbit holes.

What the heck happened with the Native Americans vs. the Settlers in the Kansas territory anyway?

Wikipedia directed me to this article. I found Wilder’s perspective pretty open-minded for its time and Pa in particular shows a lot of respect and sympathy for the Native Americans involved in the story. But I did edit my telling of the tale (never reading aloud Ma’s horrid statements) and I pointed out that the Native Americans were there first, and what happened to them was unfair in many ways and a great tragedy.

I wondered if Pa fought in the Civil War, which led me to this beautiful blog dedicated to Laura Ingalls Wilder. A lot of thoughtful posts and a description of a visit to the New York location where Farmer Boy takes place enriched my understanding of the books, I think.

That “durned” Bird’s Nest Pudding from Farmer Boy: what WAS it?

After my Mom read the post, she sent me the copy of the Little House on the Prairie Cookbook I grew up with and it does have the Bird’s Nest Pudding in it! Then, a reader linked to an article in Saveur about Little House food and I went there. The name of the author who wrote the article sounded familiar: Isabel Gillies. So I googled her and realized she had written a memoir (Happens Every Day) that I had wanted to read when it came out a few years ago. I found an excerpt and decided I wanted to read the whole thing.

Do you fall down rabbit holes on the internet? Do you think it enhances your reading experience or distracts you from it?

Filed under What Say You?, writing

The Joy of Reading

I cannot read a book to save my life these days.

I have always been the “girl-with-her-nose-in-a-book” type, so this is a strange and unwelcome development.

Has my brain been fried by all of the texting and blog reading I’ve done? Do I need the back light of a screen? The back and forth between comments and commenters? The bells and whistles and rabbit holes? I don’t really know why I can’t read a book. But unless I’m on vacation/have no access to my iPad, I can’t get through a hard-bound publication. Maybe this is why I see people now featuring photos of themselves with neat, olde thyme-y vintage books in pictorials and in Kinfolk: perhaps reading a book is now an aspirational goal?

On the other hand, I can read aloud. That holds my attention properly. The twins and I have been reading the Little House books. It’s a strange thing to revisit a book that you read as a child when you are an adult. I didn’t originally notice Ma’s casual racism nor did I note how odd it was that Pa moved the family around so much. Nor did I contemplate how dangerous so many of their adventures were. But there are many things to admire, too: the stoicism of the Ingalls, the strong personality of Laura herself (she was tough as nails), Pa’s openheartedness, Ma’s formidable cheerfulness. Most of all, I admire how much they made from scratch.

Can you imagine a family moving to a wilderness area today and building their own house from nearby trees and rocks and mud? That’s what the Ingalls did in Little House on the Prairie. Or managing a full, self-sustaining farm, as the more prosperous Wilders did in Farmer Boy? Ten year old Almanzo played a crucial part in growing the family’s food. Of course, he also played a crucial part in EATING a lot of that food, too. So many of the scenes featured a famished Almanzo eating the largest array of food imaginable, including the ever-intriguing “Bird’s Nest Pudding.” (What WAS that, anyway? I still want to know.) My daughter asked me the other day, “Why don’t we make more stuff?” A good question, and something I find myself increasingly eager to do.

Have you re-read any books you loved as a child and noticed nuances and character flaws you didn’t the first time around? Do you also have difficulty concentrating while reading a “real” book?

A Little Pregnant wrote an absolutely brilliant post about Laura Ingalls Wilder’s classic children’s book The Long Winter. She debates whether the book is too grisly and scary for her five-year-old son and comes to the conclusion that Ma Ingalls is a pill. Graphic language about “dropseat lovin’ ” is involved, so consider yourself forewarned.

First of all, I believe it’s time for me to re-read the Little House series, which I adored as a child, because it seems there is a lot of crazy crap in there that I don’t remember. Racism, minstrel shows, pig bladders, Scarlet Fever and an inappropriate purchase of an organ (the musical kind, not the animal kind) in the midst of family destitution? REALLY? There are also some who believe that Pa Ingalls was bi-polar, always gambling on ill-advised financial schemes and moving his family around when debt was threatened. And finally, this fascinating New Yorker article about Laura’s daughter, Rose Wilder Lane, posited that ROSE might have been the main writer of the books, not her mother. Rose was an accomplished journalist and a best-selling author BEFORE the Little House books came out. Also, apparently, she and her mother would be Tea Party enthusiasts today.

What I mainly remember about the Little House books was the palpable sense of deprivation, hardship, hunger and danger the Ingalls family faced, day-in, day-out. Yet, there was also a sense of hope and adventure the family was able to maintain, even after the eldest daughter went blind and even with the daily threat of starving to death. I believe I need to read The Long Winter again to ascertain if the Ingalls had a magical formula for surviving scary situations. Stoicism is, according to Tom Morris, “about managing your deepest inner resources and learning to find your way through any circumstances, no matter how challenging they may be.” Or were the Ingalls just insane optimists?

What do you think? Is Julie right: was Ma a pill? Was Pa bi-polar? Were the pioneers stoics, or insane?