I’m not really sure how I missed this post the first time around.

My dad is a serious book snob. For “my” birthday one year, he bought me a leather-bound, acid-free paged, gold-leafed series of Classic Novels. Among them: “Pride and Prejudice,” “War and Peace,” “Great Expectations,” “Arabian Nights,” “The Three Musketeers.”

I could not have been less interested in these weighty novels. But they were PERFECT for disguising the flimsy paperbacks I was REALLY reading.

As always, there was a gateway. My gateway was my friend Wendy, who every year would spend the summer in Florida at her dad and stepmom’s house. Her stepmom had an EPIC collection of historical romance: maybe it was the climate? Wendy would bring a few home with her, each year, and would smuggle them away from her disapproving mom.

When I was 16, she brought home a trilogy by Valerie Sherwood and let me borrow it, one book at a time. 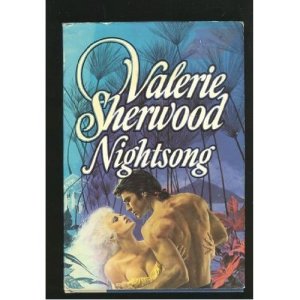 “A sweet wild madness swept over Carolina Lightfoot at the sight of elegant Lord Thomas Angevine, reputed to be the most notorious rake in London. The proud Colonial beauty, graced with silvergold hair and flashing eyes, hoped to be his bride. Then, swept into a growing storm of scandal, she was banished to Virginia. Captured by buccaneers on the high seas, Carolina became the Silver Wench of the Caribbean…and the defiant prisoner of the infamous Kells, a brooding man with insolent charm andd a mysterious past.

On the island of Tortuga, where gentle winds caressed the perfumed nights and a lustrous moon whispered love’s allure, Carolina must escape…to find Thomas again, and to flee Kells’ passionate embrace, the rapturous temptation of his…LOVESONG”

I mean, how could boring Porthos compete with a man named “the infamous Kells?” Who, suspiciously, resembled Lord Angevine. Like a lot. Needless to say, the series set my standard for the next few years.

There was a typical plot I stuck to: the hero needed to be a “buccaneer” from the early 1700s. NOT A PIRATE! Buccaneers were English noblemen in disguise who ran rum in Colonial America as a way to stick it to the Spanish. Because nothing was more noble than supplying the colonies with alcohol? And that made the Spanish angry? I was never sure of the particulars.

The heroine needed to be reduced in circumstances, very spirited or “mercurial,” and possessed of a very unusual type of beauty: violet-eyed with platinum hair, cocoa-skinned and emerald eyed, etc.

– The buccaneer, for all his “roughness,” was actually well-educated in England by a governess, and the study on his ship contained the kind of leather-bound tomes I hid my reading in.
– The buccaneer owned a secret island in the Caribbean.
– There were misunderstandings and “secret identities,” which could be seen from a mariner’s mile away.
– There was revenge upon those who reduced the heroine’s circumstances.
– Action!

In college, I “graduated” to Amanda Quick novels. She was a bit more upmarket: her novels were set in the Regency period, the heroine was generally characterized by her geekery, smarts and wit (not her beauty), and the hero was generally some kind of Viscount or something with a tragic and misunderstood back story. There was often a mystery to be solved: usually about the tragic and misunderstood back story.

“There was no doubt about it. What Miss Harriet Pomeroy needed was a man. Someone powerful and clever who could help her rout the unscrupulous thieves who were using her beloved caves to hide their loot. But when Harriet summoned Gideon Westbrook, Viscount St. Justin, to her aid, she could not know that she was summoning the devil himself.

Dubbed the Beast of Blackthorne Hall for his scarred face and lecherous past, Gideon was strong and fierce and notoriously menacing. Yet Harriet could not find it in her heart to fear him. For in his tawny gaze she sensed a savage pain she longed to soothe…and a searing passion she yearned to answer. Now, caught up in the beast’s clutches, Harriet must find a way to win his heart — and evade the deadly trap of a scheming villain who would see them parted for all time.”

I adore that her name is Harriet. Nothing says “spirited nerd” like the name Harriet. (I say that with love.)

I eventually read “Pride and Prejudice” and all of the other books my dad gave me and loved them.

But those romance novels really kept my love of reading alive and well when I was a crabby teenager hiding in my room, trying to avoid yard work chores.

(Our house had many trees that shed many types of debris all year-round. Lord, I hated them!)

What books did you love reading that may have been, er, somewhat less well-regarded than Margaret Atwood’s work?

And, are you going to read that book-that-shall-not-be-named here, for my brother reads this blog and he is the BIGGEST book snob around.

7 responses to “Now For Something Completely Different…Classic Romance Novels”